Barker delighted to return to the Bears

Ben Barker will again lead Redcar’s Championship assault when the tapes rise on the 2018 speedway season next March.
The return of the popular Cornishman to the Media Prima Arena was confirmed to an expectant audience in the SG Petch Bears trackside bar on Thursday and greeted with universal approval.
“I think the supporters would have lynched me had we not had made sure Ben came back,” stressed team boss Jitendra Duffill.
“He was such a big favourite and the only person I wanted as captain next year.
“I’m thrilled and Ben was so keen to return that the deal was actually wrapped up some time ago.
“We just couldn’t release it until we knew all the full ramifications of last weekend’s promoters conference.” 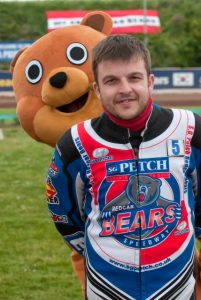 St Austell-based Barker, who scored almost 400 points in 35 appearances last season and claimed over 60% of the fans’ votes to be named ‘Bear of the Year’, was equally enthusiastic, commenting:
“I’m really pleased to have everything sorted out as I made it clear from halfway through last season that the only place I wanted to make my future at was Redcar.
“The travelling has been really hard but, if you look at it, the Championship is very much a northern league nowadays, so it doesn’t make much difference which club I’m racing for.
“If you are a speedway rider from Cornwall, you know you are going to have to travel!
“The people running Redcar really try to make life as easy as possible and the fans have been great – so welcoming – which makes it all worthwhile.”

Duffill continued: “Team building is well under way and I would hope to have it finished in the next couple of weeks.
“I’m not a million miles away and am just waiting on the decision of a couple of riders.”
Bears promoter Kevin Keay was also thrilled with the return of the popular Cornishman: “I’m delighted we have Ben Barker as a Bear again next season as that’s all the fans have spoken about since the season finished. The fans have really taken to him and his wholehearted efforts to entertain so we are very pleased to announce him as our first signing for 2018.”

Keay and Duffill are known to be scouring the globe with a good chance that an established rider, not currently associated with a British club, could shortly be on the way to Teesside.

Courtesy of Keith McGhie and the Gazette.